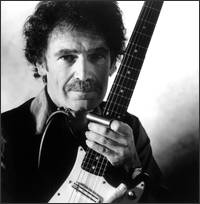 Born March 30, 1948 in Heswall, Cheshire, England, but raised from age four in Perth, Australia, Hole became interested in blues guitar around age six after hearing a schoolmate's Muddy Waters album. He received his first guitar at age 12, but became discouraged trying to learn it by himself (teachers were in short supply in isolated Perth) and abandoned it until he was 16. This time, he began picking up riffs and techniques from records. Primary influences include Eric Clapton, Jimi Hendrix, Robert Johnson, Elmore James and Mississippi Fred McDowell. Hole became a professional in 1972 working with a band in London. Returning to Perth in 1974, he began his long stint touring the western Australian club circuit, playing 20 years in remote towns before making Short Fuse Blues, an album he financed, produced and recorded with his band, Short Fuse, in three days in 1990. He then hawked the album during club performances, and on a whim sent a copy to Guitar Player magazine in the U.S. The editor listened to it, liked it, wrote a praise-filled article hailing him as the newest guitar wizard and comparing him to such greats as Stevie Ray Vaughan and Albert King. He then helped Hole land a distribution deal with Alligator Records. The American debut of Short Fuse Blues earned Hole considerable praise from other sources and was well-received by the public. Although best known in Australia, Hole, with the release of his second and third albums, Working Overtime (1993) and Steel on Steel (1995 both for Alligator), have garnered him a respectable following in the U.S. and Europe.Played to early in the afternoon for us to catch them.Started with "Metal Heart" and ended with "Fast As A Shark" as last encore. Accept-drummer Stefan Kaufmann played guitar with Udo now. Back To Main Menu